Happy Halloween, one and all! I’ve been at work all day, and I’m going to a party this evening, so I’ll keep this short, but it wouldn’t be right to let Halloween go by and not say something. So I’ll give you some seasonally appropriate links.

For starters, however you feel about Trick ‘r Treat, there’s really no more seasonally appropriate movie around. If you haven’t seen it, I recommend giving it a look, and if you have, there are a plethora of short films from the same director produced by FearNET that are available on YouTube. There’s also the original animated short film that started the whole shebang off, which you can see right here:

If you’ve already seen Trick ‘r Treat, or are otherwise looking for more stuff to watch this most ghoulish of seasons, the Onion AV Club is doing their annual 24 Hours of Horror movie marathon list, this time with the great Joe Dante. And while you’re at it, you can also check out last year’s list with Edgar Wright. One of these years, I’ll do up my own list, but this year won’t be that year.

(I haven’t actually gotten to read all of Dante’s list yet, but I’m looking forward to finishing it up soon. And I think I own most of those movies, so if I was insane I could actually do the marathon!)

Maybe the most exciting thing to happen so far today, though, for me and anyone else who is unhealthily obsessed with the work of Mike Mignola, is that Dark Horse released a free 119-page digital sampler of a bunch of their horror titles, including a new Baltimore story, B.P.R.D. 1948, and, best of all, a new preview of Hellboy in Hell!

That’s pretty much it for me. Have a safe and happy Halloween, and I’ll see you back here in November for the start of my Hitchcock marathon, and more of the same. In the meantime, I’ll leave you with a drawing that artist Chris Sanders (of Lilo & Stitch and How to Train Your Dragon, among others) shared on his Facebook, and that has become my new favorite Halloween drawing of the moment. 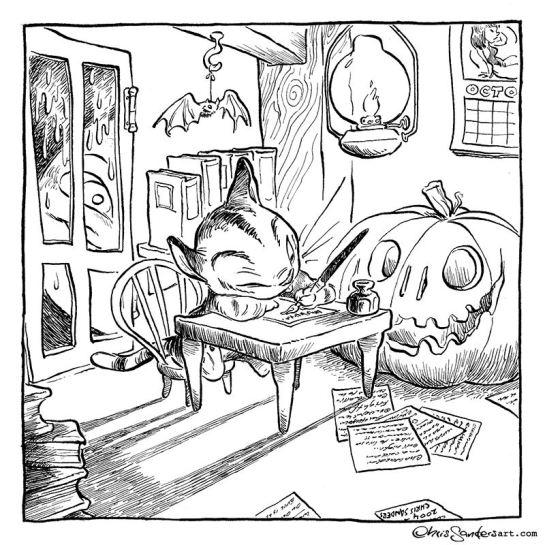