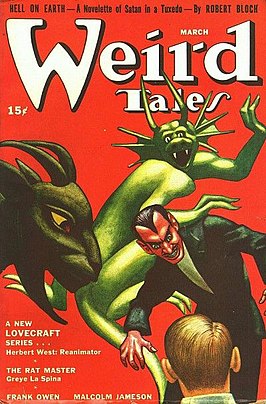 This is a weird one…

I wrote “Lovecrafting” in response to Jesse Bullington‘s invitation for me to submit something to Letters to Lovecraft, a Lovecraftian anthology with a particularly unusual logline. Rather than drawing our inspirations from Lovecraft’s stories or beasties, we were asked to read his seminal essay “Supernatural Horror in Literature,” select a passage, and write a story in response. As I was reading back over the essay, I was struck more than I had been previously by Lovecraft’s racism and racial essentialism, but also by this odd streak of what I can only call proto-geek pride, as he continually asserted that there was something very unique and special about people who loved supernatural literature. So the passage I ultimately chose was:

“The appeal of the spectrally macabre is generally narrow because it demands from the reader a certain degree of imagination and a capacity for detachment from every-day life.

… and “Lovecrafting” was the result. Weird less for its plot than for the manner of its telling, a story with a jumbled chronology, done in a combination of film-treatment-like-segments broken up by portions of fictional weird tales, complete with intentionally incorrect uses of five-dollar-words. At first glance, that might appear to produce a story too mired in its own literary antecedents and gimmicks to pair well with film, but in this case just about any Stuart Gordon Lovecraft adaptation would fit the bill perfectly. And while From Beyond might match better with the odd and ephemeral monsters of “Lovecrafting,” I think I’m going to have to go with the original Re-Animator as my official pairing pick.