As a result of a conversation on Facebook some three months or so ago, several of my friends recently presented me with my very own, framed, official certificate of monster expertise. So now it’s official! Here’s a look at the certificate: 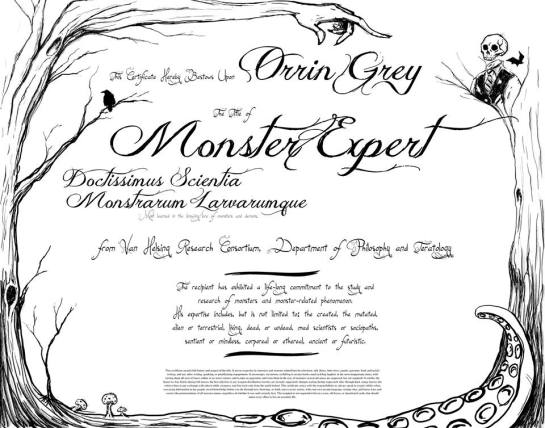 Thanks to Bear Weiter, Steve Scearce, Jeremy Tolbert, Marlyse Comte, Selena Chambers, Molly Tanzer, and anyone else who had any hand in this! I have the best friends!

In other news, some publication-related announcements. First off, Tales of Jack the Ripper, featuring my story “Ripperology,” is now up on Goodreads, so you can add it to your lists. It should be out in August. You can also catch a glimpse of the finished cover there, featuring some of the many fine authors with whom I’ll be sharing company.

A bit farther down the road, “The Lesser Keys,” my Lovecraftian Goetic demonology story set in 1920s Kansas City, will be appearing in Jazz Age Cthulhu in 2014, alongside new novelettes by Jennifer Brozek and Avery Cahill.