Today’s the day: Gardinel’s Real Estate, the first ‘zine from Mike Corley and myself is now one sale! You can get yours right here, but you’d better hurry, because they’re threatening to go fast, and they’re limited to a run of 100 signed and hand-numbered copies, so when they go, they’re gone forever! Thirteen spooky houses, illustrated by Mr. Corley with words by yours truly. It’s already gotten a write-up over at Norville Rogers, where they say it “would be a great gift for realtors, people buying or selling a house, or anyone who enjoys the Halloween season.” So if you know anyone like that, pick up your copy here! 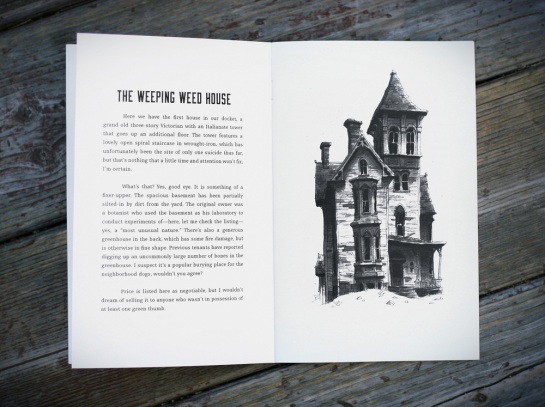 Named for the carnivorous houses from the writings of Manly Wade Wellman, Gardinel’s Real Estate began with an idea that Mike brought to me. He’d been drawing spooky houses, and he approached me with the pitich of writing up a faux real estate pamphlet for them. He drew the houses and sent them to me, and I came up with a suitably haunted history, narrated in the voice of our horror host-cum-estate agent Cedric Gardinel. Inside you’ll find tales of witchcraft, hidden fortunes, accusations of vampirism, demonic portraits, a haunted chair, and several experiments of a “most unusual nature.”

I had a lot of fun working on Gardinel’s, and I’m very happy to see it get out into the world. The same write-up at Norville Rogers calls it “charming rather than scary,” which I think is dead on, and is also a mode in which I love to operate, but don’t get to as often as I’d like. One of my biggest influences is E.F. Benson, who could do charming and scary in equal measures, and sometimes both in the same story. If I get to write more than a few stories that could be described as “Bensonian” in my career, then I’ll be a happy man. I certainly think Gardinel’s could be, and that’ll do for a start.

In honor of the occasion, my Countdown to Halloween this year is going to be more than a little haunted house themed, so keep an eye out for that!