Those who’ve been around here awhile are probably already familiar with Pseudopod, but in case you’re not, they’re a terrific horror fiction podcast. I sold my first story to Pseudopod clear back in 2009, when I was still three years away from having a book out with my name on it. It remains a favorite, and you can listen to it here.

Over the years I’ve enjoyed a good working relationship with Pseudopod, and sold them a few more stories. The folks who work there are all great people who do great work, and though we (or at least I) tend to think of podcasts as something separate from, say, magazines, there are few horror publications going that consistently produce the kind of quality that you get from Pseudopod, full stop.

This year represents their tenth anniversary, and in honor of the occasion they’re holding a Kickstarter to raise funds to help pay narrators. (They already pay their authors pro rates, making them also one of the only consistent pro-paying all-horror markets around.) The Kickstarter has all sorts of great reward tiers, and one of the most exciting aspects is that the folks at Pseudopod have assembled their first anthology for the occasion, including some classic reprints from their archives but also featuring new tales by Damien Angelica Walters, A.C. Wise, and yours truly, to name a few.

I’m really happy with “New and Strangely Bodied,” the story that I wrote for For Mortal Things Unsung, and I’m excited for it to make its way out into the world. Besides the anthology, there’s a backer tier where you can get every one of my books, in case you don’t have those already, including the forthcoming deluxe edition of Never Bet the Devil & Other Warnings from Strix Publishing. (And speaking of Strix, there’s also a backer tier that gets you Never Bet the Devil along with Strix’s first publication, The Book of Starry Wisdom, featuring a deluxe illustrated treatment of three of Lovecraft’s stories, along with essays by myself and several other, more notable voices in the weird field.)

But really, I don’t need to be telling you any of this, because a picture is worth a thousand words, and there’s only one thing you really need to know: Look at this freakin’ tiki mug! 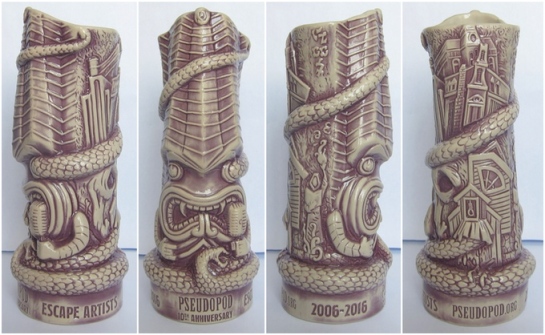