Every now and then, I watch a movie that makes me lament that I am no longer actively writing Vault of Secrets columns or working on another volume of Monsters from the Vault. Shanks is definitely one of those movies.

Some time ago, I decided to try to watch some of the other films of William Castle that I hadn’t yet seen, specifically the ones that come after those contained in Indicator’s brilliant two–volume William Castle at Columbia boxed sets. 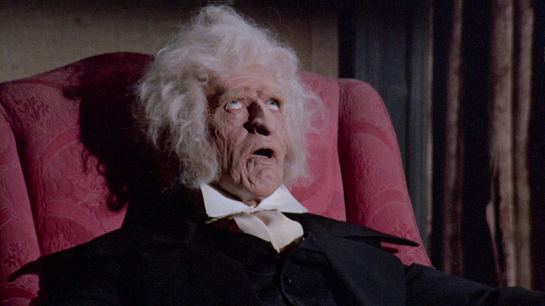 I started with Shanks, his final film as director, because I was fascinated by its logline. A showpiece for famed mime Marcel Marceau, Shanks sees Marceau playing dual roles – a deaf and unspeaking puppeteer, the eponymous Malcolm Shanks, and “Old Walker,” an eccentric scientist who invents a kind of galvanic machine to “puppeteer” dead bodies via remote control.

Old Walker hires Shanks as an assistant, only to die shortly after they have begun their experiments. After a nasty run-in with his wicked step-sister (Tsilla Chelton) and her alcoholic husband (Philippe Clay), Shanks decides to reanimate Old Walker using the same galvinic machine.

Because this is a borderline horror movie – the opening titles call it a “grim fairy tale,” and the film is heavily stylized, think Edward Scissorhands nearly two decades before – things go badly from there, and before long Shanks has a couple of other bodies to puppeteer around.

These bodies are, naturally, the centerpiece of the film, and the physical performances of Marceau and the other two actors playing puppeteered corpses is nothing short of mesmerizing. Their movements are played for comedy more often than not, but the sequence in which Shanks first reanimates Old Walker is a showstopper that reminds us of why horror films should – and often do – rely heavily on mimes, dancers, and the like.

In spite of this and a later sequence in which Old Walker comes out of the grave, Shanks is largely absent any of Castle’s “shock” scenes or usual gimmicks – but that isn’t to say that this is any less a Castle film. It just shares more in common with pictures like his version of The Old Dark House, 13 Frightened Girls, or Zotz! than House on Haunted Hill or The Tingler.

In fact, Castle does some genuinely impressive work here. Though it is a “talkie,” Shanks is built around Marceau’s silent performance as Malcolm Shanks – and the mummery of him and the other performers as animated corpses. As such, it is often filmed like a silent movie, complete with intertitles.

Though there isn’t a lot of dialogue, the use of sound is frequently incredible. The score by Alex North, was nominated for an Academy Award. It was also made up, partly, of his rejected score for 2001: A Space Odyssey.

The music works like gangbusters, but it isn’t alone. All of the sound work is excellent. See a sequence in which the laugh track to a sitcom on TV is synced to the events in the film perfectly.

What prompted me to write this post about Shanks was that, when I posted briefly about it on social media, I was met with a litany of variations on “why have I never heard of this before?”

It isn’t exactly a lost gem, necessarily – it’s uneven and awkward and has a number of other problems that I’ll get into in a minute – but it is definitely a film that more people should have at least heard of. And, like most Castle films, in spite of its myriad problems, I loved it.

So, those problems. It’s uneven, like I said. The last reel of the film takes a hard left turn into some kind of PG-rated Last House on the Left territory, including an implied sexual assault on a young girl. Even before that, though, the semi-romantic relationship between fifty-something Marceau and said sixteen-year-old girl is already cringey in the extreme.

The magic of Shanks comes from its heavily stylized approach and from its incredible physical performances – and, yeah, a little bit from that macabre fairy dust that Castle seems able to sprinkle on even the most humdrum of his films.

As for why more people haven’t heard of Castle’s swan song, I couldn’t say. But they should. It’s a genuinely odd entry in an altogether odd canon. I watched it on VOD, but Olive Films apparently released a Blu-ray that I haven’t seen, so I can’t comment on. I would love it if Indicator decided to continue their run of Castle boxed sets with a few of these later films from his oeuvre.

(The quote that I used in the title of this post comes from William Makepeace Thackeray and is used as a coda to the film.)