Today, I learned that Stuart Gordon has passed into the Beyond at the age of 72. In a recent (and, as yet, unpublished) interview, Marta Oliehoek-Samitowska asked me about Stuart Gordon, his influence on my work, and why “anyone interested in horror” should see his films. I think I said it as well there as I ever could here, so I’m just going to give you a sneak peek at the (extensive and wide-ranging) interview:

Probably the best thing about Stuart Gordon’s films is the energy of them. Anyone who pays attention to me for very long will discover that I love theatricality; I love it when things brush up against—or stumble all the way over into—camp, and I think some of the best horror out there uses camp, uses familiarity and clichés, like we talked about up above, to put you at ease so that it can sneak in something more subversive or strange than it would otherwise be able to get away with.

Plus, Gordon’s films are just so delightfully lurid and weird. So many horror paperbacks, movie posters, and VHS covers promise this gonzo experience, and so few of them can actually deliver it. Gordon’s films usually can.

If you’re intrigued, you can read the whole interview in Marta’s forthcoming book of interviews and pencil portraits, Horror in the Eye of the Beholder, which is coming out soon, albeit possibly only in digital form. 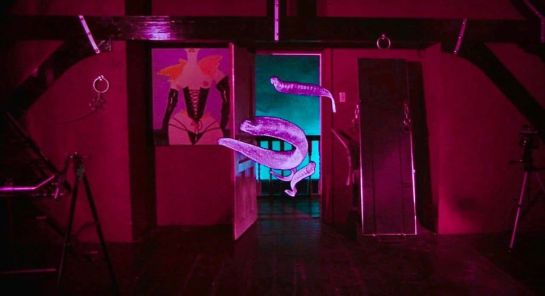 Gordon was a visionary, for better or (sometimes, maybe) worse. His films informed the early fabric of my understanding of horror cinema, of my tastes, of my aesthetic, easily every bit as much as someone like John Carpenter.

Gordon (and Yuzna) may have been known for the uncomfortable horniness of their flicks, but I think even that aspect served a purpose besides “the writer’s barely-disguised fetish.” They made the films feel like outsider art – lurid and unsanitized and occasionally problematic, as Lovecraft adaptations probably should be, at least a bit.