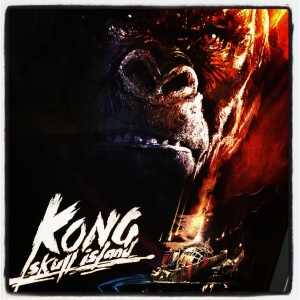 No remake can ever live up to the original King Kong. Luckily for Skull Island, it’s smart enough not to try.

From its largely unnecessary opening sequence (because we’ll get it all exposited to us again later), Skull Island is a lot sillier than I was expecting from the trailers. Not just in a “giant monsters smashing each other” kind of way, either. In a “Tom Hiddleston slow-motion chopping up pterodactyls with a katana” way. Pretty much top to bottom, this takes place in what is fundamentally a comic book universe without superheroes. Which is fine for Kong, and especially fine given that this is basically the first step in creating a shared universe with Gareth Evans’ 2014 Godzilla, to be exploited first in Mike Dougherty’s forthcoming Godzilla: King of the Monsters and then later in a planned Godzilla vs Kong.

While Skull Island never even aspires to anything more substantive than what is essentially the pilot for a particularly brutal Saturday morning cartoon, it learned the lessons that Godzilla had to teach, even if it then goes on to make its own mistakes along the way. Where Godzilla didn’t spend enough time on the titular monster, Kong is all over this film, along with piles and piles of other monstrous denizens of the eponymous island. (Including the Best. Stick insect. Ever.) Your mileage on individual critters may vary, but at least there are lots of them, including a few nice visual nods to other giant monster movies that I may or may not have been reading too much into.

And while the human characters here may be just as thinly drawn as those in Godzilla, they replace any attempt at “normal folks” with a collection primarily composed of outsize archetypes, ready made for Saturday morning syndication. While most of the actors aren’t given a lot to do, John C. Reilly and Samuel L. Jackson steal the show, with the latter playing Ahab to Kong’s Moby Dick.

A quick skim across other reviews shows lots of people complaining about the screenplay, and while yeah, we could all have probably wished for something with a little more heft there, nobody really comes to a movie like this because of the screenplay, right? The biggest problem that Skull Island actually has is that the (frequent) monster battles too often feel like exactly what they are: nothing but a bunch of pixels. No matter how good they look, there’s a weightlessness, a lack of physicality, that keeps them from having the punch that you want from seeing Kong wrestling with a giant octopus or some weird, surprisingly gross skull-headed lizard monster.

Before I walked into the theatre, a friend basically texted me to say, “I hope it’s good!” And I replied back that I was pretty sure it would be what I wanted it to be; and it was. On the spectrum of modern giant monster movies, it’s situated firmly below Pacific Rim, which is certainly the contemporary benchmark, at least for me. But it’s also a big step up from my recollections of Godzilla, and a huge improvement on Peter Jackson’s 2005 attempt to remake Kong, if only because it never makes the mistake of trying to replicate the original’s success.

Instead, Skull Island is a fun, cartoonish movie with lots of giant monsters fighting one-another while humans played by good actors mostly narrate things that just happened. Chances are that’s all you’re going in for, which is good, because it’s all you’re gonna get. (There’s your pull quote, in case you need one.)