I recently got back from a trip to Atlanta for the first (annual?) Outer Dark Symposium on the Greater Weird, where I was one of a handful of panelists who talked about “The Weird Monster.” While the panel (and, indeed, all of the Symposium) is intended to show up as a part of The Outer Dark podcast sooner or later, I wanted to share a few thoughts that came about independent from but related to the panel.

For one thing, the discussion of the subject among the panelists began (as such things so often do) at the bar the night before the Symposium actually started, and continued throughout the weekend, ranging far and wide. On the flight to Atlanta and back, I started reading John Langan’s The Fisherman, and had I finished it then, I could certainly have brought it up as a modern novel that tackles the “weird monster.” (Not to mention a great contemporary example of the “weird novel,” which was the subject of another panel at the Symposium.)

As is often the case, however, while we talked about monsters in literature, many of our examples were drawn from movies. Because, while we have sometimes read the same books, we have almost all seen the same movies. Throughout the weekend, subjects returned with an almost uncanny regularity, including (probably because of the proximity of Alien: Covenenant) how angry we all still were at Ridley Scott’s Prometheus for being so unforgivably terrible (with the exception of a handful of dogged defenders).

One subject that came up a couple of times was Kong: Skull Island, which I had recently seen, and which we discussed, along with the whole backlog of Kong and Godzilla and other kaiju cinema through the lens of the weird monster. I’m not really here to regurgitate any of our theories on that, though no less a personage than Caitlin R. Kiernan has made a pretty good argument in the past for consideration of the original 1933 King Kong as a Lovecraftian tale.

One thing I didn’t get to talk much about, except with kaiju enthusiast and Symposium co-organizer Anya Martin on the car ride back to the airport, is a subject that I have been meaning to bring up in re: Skull Island, but that I wanted to wait until the movie had been in theatres for a few weeks so as to avoid spoilers. Still, fair warning, there will be a few in what follows, so heads up.

I liked Skull Island well enough (you can read my thoughts about it here), but one thing that really struck me about it is something that I haven’t seen anyone else talking about, though I’m sure they have. Kong: Skull Island was packed to the gills with monsters, and while those monsters may have varied somewhat in execution, I saw in most of them a sort of kinship with monsters from previous Kong and Godzilla movies. The big spider that shows up in Skull Island looks an awful lot like Godzilla’s sometime-nemesis Kumonga, while the scene of Kong fighting the squids or octopi could easily be a nod to the scene when Kong fights the giant octopus in King Kong vs. Godzilla.

Those are pretty minor, though. More significant are the skull crawlers. These bipedal lizard-like creatures are the main antagonists of Skull Island, the subterranean horrors that Kong’s presence helps protect the rest of the island from. Their design has received both praise and derision, depending on the person, but virtually everyone I’ve seen talk about them has discussed them as though they are a wholly new addition to the giant monster canon, but for me, at a glance, I saw something else entirely.

As anyone who is reading this probably knows, the first cut of the original 1933 King Kong contained a famous (and famously lost) sequence in which the protagonists fall into a “spider pit” and are attacked by all sorts of weird creatures. Over the years, a couple of shots that are supposedly from this sequence have surfaced, but the sequence itself remains one of the most famous pieces of lost film in history. When Peter Jackson remade King Kong in 2005, he not only added the “spider pit” sequence back into his narrative, he also “restored” a version of it using stop-motion animation and incorporating footage from the original film. (You can watch that here.)

Apart from Peter Jackson’s recreation, the closest we’re ever likely to come to actually seeing the original “spider pit” sequence from Kong is a cave sequence in the 1957 film The Black Scorpion, for which Willis O’Brien did the special effects. (You can watch a portion of that here.) According to rumor, the models used for the cave sequence in The Black Scorpion were repurposed models from the original “spider pit” sequence. 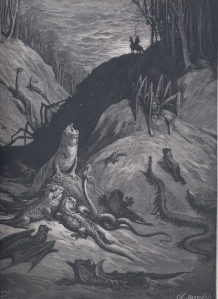 Like all of the original King Kong, the “spider pit” sequence was heavily influenced by the artwork of Gustave Dore. You can see some obvious “spider pit” seeds in a couple of Dore’s illustrations for Don Quixote and Orlando Furioso in particular. (There’s an entire thread devoted to Dore’s influence on the “spider pit” sequence that you can read here.) In Dore’s illustrations and Jackson’s recreation of the “spider pit” sequence, you’ll find odd lizard-like creatures that have only front legs, which transmutes, in The Black Scorpion, to a sort of giant worm with bifurcated tentacles mounted near its head. These bipedal lizards are, I would argue, at least potentially, perhaps subconsciously on the part of the monster designers, the ancestors of the skull crawlers from Kong: Skull Island.

This isn’t really an attempt at a defense of those critters. If they didn’t work for you on screen, chances are they still won’t, and I’ll be honest when I say that I’m not entirely sure how I feel about them, even now. (Their design seems at once boringly modern while at the same time oddly weirder than it needs to be; it took me a while to notice that they had eyes mounted behind the eye sockets of their skull-like heads.) But it was something that I noticed and (obviously) wanted to write like a thousand words about, so there you go.

[Edited: Thanks to Outer Dark host Scott Nicolay for reminding me that the weird bipedal lizard does, in fact, show up in the original King Kong, and that I hadn’t just hallucinated it there because I knew about all this other crap.]