The night has finally arrived, dark and stormy, as is only appropriate. A skeletal usher shows you the way into a moldering old movie palace, the seats hard and smelling of dust and old libraries. Above, in the darkness, something stirs, and you hear the rustling of a thousand leathery wings. 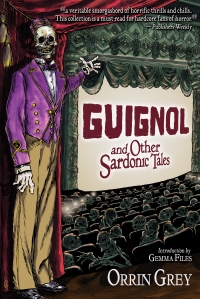 In front of you there is only a faded rectangle of light, the silver screen, waiting to show you its dreams and nightmares. You turn just a bit in your seat, trying not to draw attention to yourself, hoping to make out the faces of the other theatregoers, but you can see only blotchy shapes in the waiting dark behind you. Then your eyes are drawn back to the screen as the projector rattles to life. Up there are letters nine feet tall, written in crawling, shivering font that is now black, now purple, now red.

What do the letters say?

They say that Guignol & Other Sardonic Tales, my latest collection of weird stories, is now up for pre-order from the fine and fiendish folks at Word Horde! Fourteen tales of terror and torment and, yes, more than a few monsters, all specially prepared with author’s notes and an introduction by Gemma Files, all for your delectation, nestled within a cover by Nick Gucker. What’s more, four of those tales have never seen print before, while several others are little-read or hard-to-find, including my out-of-print novelette The Cult of Headless Men.

Alongside those new tales are stories that previously appeared in Autumn Cthulhu, Children of Gla’aki, Eternal Frankenstein, Gothic Lovecraft, and more! There are stories of ghosts and wizards, demonology and dark deeds done in the dead of night, stop-motion monsters and the lost episodes of old television shows, hidden passages in old houses and unusual methods of communicating with the dead. There are stories that take place in far-off and imaginary lands, on phantom planets and in times gone by, and there are stories as close as your own back yard.

I’ll be talking more about Guignol as it gets closer to publication, but in the meantime, if you really want to see what’s going to happen next on that sleeping silver screen, you’ll just have to buy your ticket and take your chances…