This isn’t going to be a review of Midsommar, which I watched last night, but instead a discussion of one aspect of it. I don’t think it’ll really have anything in it that qualifies as spoilers, but on the off chance, y’know, watch out.

I didn’t love Midsommar and I didn’t hate it. I don’t think I liked it as much as Hereditary, and I don’t think it brought much that was terribly new to the folk horror table, besides a real meticulousness. But again, I said this wasn’t a review, and I don’t mean for it to be. 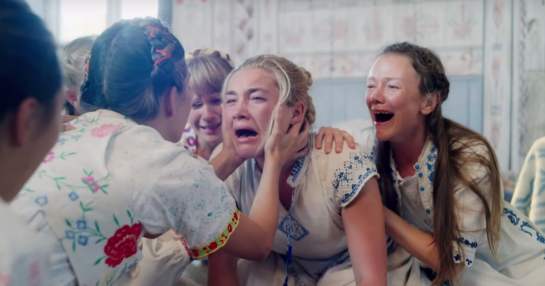 The main character in Midsommar (played brilliantly by Florence Pugh) has an anxiety disorder. She has it before the traumatic events which propel her onto the ill-fated trip that makes up the meat of the movie. Probably she has always had it. Just like me.

And more so than maybe any other movie I’ve ever seen, Midsommar, in its first half-hour or so, nails what it feels like to have an anxiety disorder, at least for me.

When I got home from the theatre, I called its first 20 or 30 minutes “basically the tunnel-visioning run-up to a panic attack put on film.” I guess it would be easy to read that as “it’s scary,” but, while Midsommar is many things, it is emphatically not particularly scary.

“It’s definitely a horror movie,” one of the people I saw it with said afterward. “But it’s not a scary movie.” I’d be inclined to agree.

And yet, I took half an alprazolam about the time they got on the plane. This before the “horror” part of the movie had really kicked in.

Normally, movies don’t trigger my anxiety. Ever. At all.

My therapist used to find it ironic that I had a significant anxiety disorder and suffered from frequent panic attacks but that I also watched horror movies practically for a living. But movies–pretty much no matter how tense or shocking or disturbing–have always been my safe place. Horror movies especially.

And I didn’t pop an alprazolam because Midsommar was scary or shocking or tense. I took one because the film felt so much like the run-up to a panic attack that I could feel one of my own just starting to flutter its wings somewhere deep down in my ribcage, in the dark space behind my own eyes, tingling at the tips of my fingers.

Anxiety as a disorder–rather than simply a natural reaction that people have to traumatic or frightening situations–isn’t something that movies get right very often. Whatever your thoughts on Ari Aster’s approach to mental illness in his films so far (and I think there are a LOT of thoughts to have on the subject), this depiction of anxiety felt right to me.

(The scene of her stalking around, arms rigid, fists clenched at her sides to keep from scratching at herself, telling herself over and over again to, “Stop it. Stop it.” I have literally done that exact thing more times than I can count.)

So, if you don’t suffer from anxiety, or do and it takes a different form, and you want an idea of what it feels like to be me–sometimes more than others, of course, but never gone completely–watch the first part of Midsommar, everything up to the scene where Dani wakes up after they take the mushrooms. That’ll give you a taste.