I can’t remember a time that I didn’t love resort towns. I never got to go to them very often when I was a kid, but anytime I did I felt instantly enchanted. This goes double for resort towns along the beach, even though I’ve been to all of maybe three or four of them in my whole life.

I’ve thought a lot about why this is. I think it’s because they are such a combination of liminal spaces. Resort towns are ethereal constructions at best; built on a population that is temporary and ephemeral. They are made up of structures and infrastructures that feel theatrical. Like set-dressing rather than real places.

Resort towns that are built on the edges of the water are more liminal yet. Their boardwalks occupy that unclaimed space between the sea and the land; a space that transforms with the coming and going of the tide.

Or maybe I just watched The Lost Boys when I was really young and never got over it. 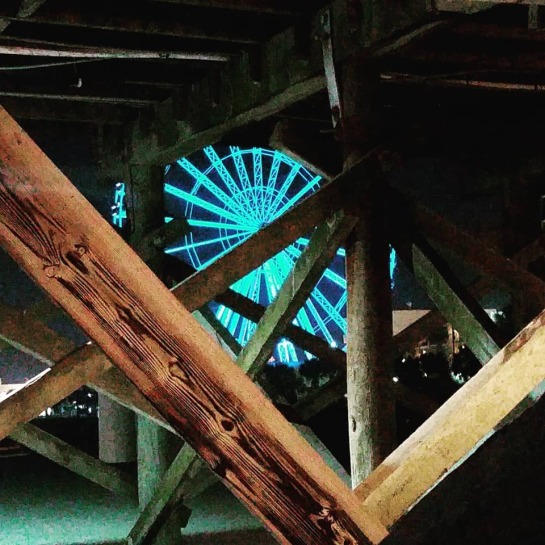 Whatever the case, I was excited to go to Myrtle Beach for an actual vacation in July. I travel a couple of times a year, usually, but it’s to go to conventions. Traveling just to travel is a rarity indeed. And traveling with Grace is rarer still.

We flew in to Charlotte, North Carolina to meet up with two of our best friends from college, spent a day or two with them, then we all drove down to Myrtle Beach. It was fun, absolutely, but also disappointing. The hotel room was very nice, with a balcony that looked out over the beating waves, but many of the logistics of the trip didn’t work out as intended.

I loved being so near that strip of beach, even if the closest I came to going in the water was a midnight walk along the swash and beneath the piers as high tide rolled in. I wanted to ride the skywheel and never managed it, but I enjoyed it always being there, lit up at night and hanging over the boardwalk. I wanted to go to the haunted house down the way, but passed for various reasons.

We did go to an amusement park (basically a midway, another liminal space I have loved ever since I was a kid) down the beach, where we rode a dilapidated wild west-themed dark ride (the best kind of ride) where we shot light guns at outlaws.

I went with Grace on a chartered fishing trip that never actually managed to go out into the deeper ocean because the sea was too rough. The fishing was bad, though they caught flounder and a shark, but we nonetheless got to see a sea turtle and a ray and I got to hold a cannonball jellyfish which had a tiny little crab living inside it who came out to say hi.

Things never really got better than standing on the balcony at night, the lights of the boardwalk off to my right, a red, red moon rising over the waves as the surf crashed against the sand.

Then we drove back to Charlotte, played King of Tokyo, which I really loved and am going to have to buy, though I’m holding out for one of the original printings because I like the old artwork much better than the new, and then flew back to Kansas City.

Probably the best parts of the trip actually happened in Charlotte, not Myrtle Beach. We went to an exhibition of Tony DiTerlizzi artwork at the Mint Museum in Charlotte which was absolutely amazing.

My first ever exposure to D&D was through DiTerlizzi’s artwork in Planescape and the 2e Monster Manual, and he was probably one of my first ever favorite artists. Seeing that art, which I had grown up with, in person was a rare pleasure.

Now I’m back, chopping my way through the thicket of freelance deadlines that sprang up while I was away. On the other side of them, I hope to make some time to watch a few movies – I had a lot of good mail just before I left and waiting for me when I got back – before I get ready for my next trip, which will be to NecronomiCon in Providence in the second half of August.

Even though I just got home and am generally a pretty sedentary person, I’m already looking forward to that next trip. I can’t wait to see a bunch of my favorite people who I see altogether too rarely and, in several cases, have never actually met in person before.

In a rarity for me and conventions, I’m actually looking forward to many of the panels being presented, and I’m on a couple of them, where I’ll be talking about Manly Wade Wellman (one of my favorite topics) and film adaptations of weird fiction authors (another of my favorite topics). I’m also participating in a group reading for the recently-released anthology Pluto in Furs, which includes my very weird story “Stygian Chambers.”

There’s a lot to be done between now and then, though, so I had better get back to it.