So here’s the big news out of World Horror that I haven’t been able to talk about before now. I’m going to be in this: 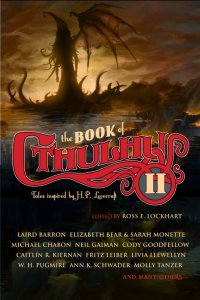 There’s not a full ToC for it yet, but you can see from the cover draft there some of the people I’m going to be sharing space with, including Fritz freaking Leiber guys, oh my god! It will be a reprint of my story “Black Hill,” which was originally in Historical Lovecraft and has since appeared in audio form at Pseudopod and as a Kindle preview for my forthcoming collection. Needless to say that little story’s done pretty well for me.

It was a rare thrill to be pulled aside by Night Shade editor Ross Lockhart and told that he had something he needed to talk to me about, and it’s one more thing off my list of things that authors do to make a handshake deal at the bar of a convention. I’m really thrilled and flattered to be included in this volume (the sequel to what was undoubtedly the cream of a very large crop of Lovecraftian reprint anthologies) alongside a bunch of really excellent stories by really excellent authors, and I’ll talk more about it when there’s an actual ToC. In the mean time, note that Night Shade literally just started their 50% off sale today, so if you’re inclined to pick up The Book of Cthulhu 2 or its predecessor (or any of their other fine titles), now is a good time to do it.