Of all the stories in Painted Monsters, the title novella was the most difficult to pair with an appropriate movie. Not because there weren’t plenty of options to choose from, but rather because there were too many! While the other stories in the collection may touch upon or are inspired by particular movies or periods in horror cinema, “Painted Monsters” is itself the collection in microcosm, a whirlwind tour of horror’s cinematic landscape, drawing inspiration from–and making overt reference to–dozens of movies from different eras. 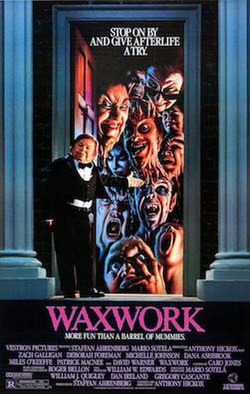 For any number of reasons, any of the great Roger Corman/Vincent Price Poe pictures would fit the tone and aesthetic of “Painted Monsters” perfectly. I’m personally fond of Pit and the Pendulum and The Haunted Palace (actually the first Lovecraft adaptation, with a Poe title tacked on to help it sell). Those hit the story’s Gothic flavor, certainly, but for its self-referential qualities, we may need to go to more modern fare. In the book’s afterword, I mention the 1988 Anthony Hickox film Waxwork, which not only has the “crash course of horror history” aspect down, but also brings in the wax museum setting.

To find the perfect cinematic pairing for “Painted Monsters,” though, I had to look to an unlikely source. Produced by Roger Corman himself–who has more than a little of his DNA in Kirby Marsh III’s grandfather–and directed by Jim Wynorski (Chopping Mall), the 1989 horror spoof Transylvania Twist is my oddball pick to pair with the heart and soul of my collection. Just hear me out.

While Transylvania Twist is, at first glance, just another horror parody, with jokes at the expense of everything from Hellraiser and A Nightmare on Elm Street to Hammer’s Gothic horrors, a closer examination finds some much weirder stuff going on here. Around Fourth Wall-breaking gags, music videos, and faux commercials, the movie makes direct references to Lovecraft through everything from its protagonist Dexter Ward to the ancient, evil tome that he’s trying to collect (The Book of Ulthar) to, ultimately, the apperance of a giant Lovecraftian monster (“The Evil One”), as played by the creature from previous Corman cheapie It Conquered the World. Not only that, but Transylvania Twist takes its title from the same song that provides “Painted Monsters” with its epigraph, while also paying homage to Targets with a character named for Boris Karloff’s Byron Orlok.

From its knowing tone to its “scavenger hunt through the old castle” plot to its references to movie monsters past and (at the time) present, Transylvania Twist is the perfect–albeit unorthodox–movie to close out our countdown, and the best double-feature I can think of for “Painted Monsters.”