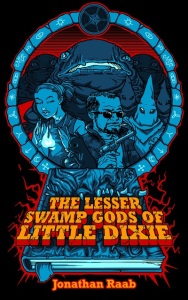 I’m pretty new to the notion of being a big enough deal that anyone would even think that a blurb from me would go any distance toward helping sell their book (and probably still a long ways off from that actually being true). The first book I was ever asked to provide a blurb for was an odd choice, a fascinating nonfiction tome on the confluence of Lovecraft and actual occult practices called, reasonably enough, H.P. Lovecraft and the Black Magickal Tradition. I liked it, and said so, though I imagine that my poor blurb was overshadowed by praise from such luminaries as Cherie Priest, Nick Mamatas, and Richard Gavin, to name a few.

More recently, Jonathan Raab, publisher and proprietor of Muzzleland Press and my co-conspirator on the occasional Creature Feature Conversation, asked me to read his latest novella, The Lesser Swamp Gods of Little Dixie. I was happy to do it, and once again I was happy to provide a blurb, though honestly, between that title and that cover, I doubt most readers of this blog need me to say anything in order to convince them to pick it up. If you do need a little extra push, though, here’s what I had to say about Mr. Raab’s delightful little book:

“It’s all-too-easy for fun stories to sound brainless, or for smart stories to come off as dry. With The Lesser Swamp Gods of Little Dixie, Jonathan Raab walks that tightrope, keeping the humor sharp, the action pulpy, the stakes human, and the weirdness weird, without ever stumbling on one side or the other. A rare gift indeed.”

You don’t have to take my word for it, though. There’s also a glowing recommendation from no less a figure in weird fiction than Christopher Slatsky, whose debut collection Alectryomancer and Other Weird Tales I have on my shelf but haven’t yet gotten the chance to read. Plus, the whole thing’s only $8, and, let’s be honest, you’d probably just waste that money anyway…